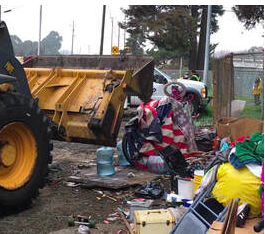 Dec. 13---A self-managed homeless encampment near Brookside and Giant Rd. that has been peaceful and stable for over two years was bulldozed and destroyed by workers from Contra Costa County and BNSF railroad last Wednesday. Over a dozen long term residents of the camp were driven out. Some of the campsites were on city land and some had spilled over onto the railroad’s property. SOS staff and CORE workers from the County health department helped place two residents in transitional housing. But the majority of residents were forced to scour the surrounding neighborhood for a new out-of-the-way place to pitch their tents. SOS and Neighbor Aid raced to help residents salvage some of their property and keep it from being destroyed. Despite these efforts, 12 tent households were dismantled as tents, clothing, furniture, and personal possessions were scooped up in front loaders and hauled away in dumpsters. (Watch YouTube video.)
“These actions by BNSF and the County are completely unnecessary,” said Daniel Barth, SOS Director. “This was the cleanest and most stable encampment in all of Richmond. The people camped there were doing no harm to anyone. The County and the City need to step up their efforts to develop practical alternatives to encampments,” Barth said. 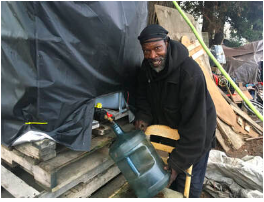 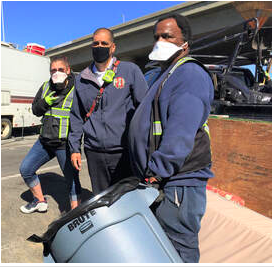 Streets Team and RFD Work on Castro Clean Up
Richmond Fire Marshall Eric Govan (center) joined SOS Streets Team members including Cyntha Simpson (left) and Tshombe Perkins to coordinate a major clean-up at the Castro St. RV encampment on Monday. "We're cleaning out a bunch of debris and removing some junked cars to try to reduce the fire danger here," Govan said. SOS staff members piled up several tons of debris ready to be hauled to the dump.
Funded by a Love Your Block Mini-Grant from the City of Richmond City Manager’s Office, Economic Development and Community Services Department. 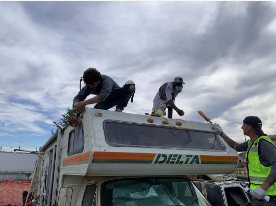 Rainy Season is starting: SOS and NeighborAid are helping Weatherproof RVs and Trailers
Ryan Manka-White of NeighborAid and SOS staff members Scott Steckler and Marcus Ellinwood completed the weatherproofing of 6 RVs yesterday at the Castro RV encampment. The work will continue at Castro and Rydin RV encampment when the weather clears.
The team applies waterproof rubber paint and tape to roofs, and caulks window seals and other gaps in the RV exterior. Many households in the encampments are welcoming the help to keep the interiors warm and dry through the winter.

Heroes of Rydin Rd.
Five members of the Rydin Rd. RV community teamed up to  revive a dying man...a stranger who had parked near the managed RV encampment to do some drugs, but overdosed. Our SOS community liaison, gives a first person account of the crisis.

I was returning from the edge of the dog park. A woman who doesn’t live here was standing next to a car, screaming "Help me! Help me!" At first I think that a guy is trying to pull her into the car -- but then I realized that she's trying to get a guy OUT of the car. I ask, "is this an overdose?" And she screams "Yes! An overdose! He's dying! Help me!" I say "I have Narcan. I'll be right back." I run to my bus screaming "Overdose! Overdose! He needs Narcan! Call 911!"

I open the bus and grab the Narcan from my locker. I try to run back to the car, but I'm winded and my back is hurting so I'm not going very fast.
Neph pulls up beside me in his car and says, "give me the stuff. I'll drive it there." I hand the Narcan to Neph and he puts his car in reverse all the way down the road, and then gives the 2 vials to Mike -- who sticks them up the guy's nose and deploys the spray. The guy is still unconscious when I get there, though -- his breathing is shallow and sporadic, his eyes are rolled back, and his skin is a blue/grey color around his mouth and cheeks.
His girl friend is cradling his head on her lap. I tell her to lift his head up -- at which point I pinch his nose closed and begin administering CPR.
I blow air into his lungs and after every breath he responds with a short/powerful gasp. I start doing chest compression and his eyes flutter open and color starts returning to his face. Louise says "He needs to stand up. We need to get him to his feet. He needs to walk around." So Doug, Mike and Neph lift him to his feet -- but he is still having a hard time staying awake -- so I start slapping him in the face. That seems to do the trick as his face shows annoyance/anger and he looks like he's about ready to start fighting. Mike says "Dude take it easy! You just overdosed!" The guy says "What??? No way!" Mike says "See all these people around you? They all just saved your life bro!" I head back to my bus thinking "Wow! We just succeeded in working together as a community! Amazing!"

Editor's note: See article below,  "SOS staff learn what to do when someone OD's " 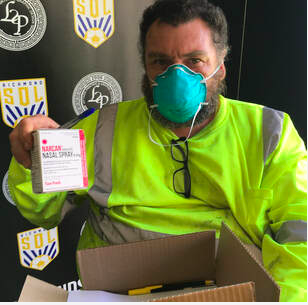 SOS staff learn what to do when someone OD's

A workshop in using Narcan (Naloxone nasal spray) to revive drug overdose victims was held at the SOS staff meeting September 9. Twenty current and potential mobile team members who come in daily contact with drug use in homeless communities attended the workshop led by Nabila Sher-Oliver from Bay Area Community Resources. The team also brainstormed on staff training priorities, with the support of program partner and staff training consultants, Empathy In Action, led by Corinna Espino and Sascha Owens. The team also explores the expansion of its mobile teams, shower power and clean-up programs. Left, John Palmer shows the Narcan dispenser that all SOS staff members will be carrying from now on. 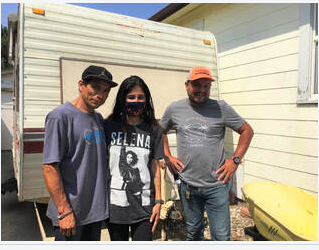 Left, Gretel and Wilson with Sergio Espinoza, former owner of the trailer.
Community concern and action results in a new home-on-wheels for a San Pablo couple

Gretel Fernandez and Wilson Auyon-Maldonado  are  living in a new trailer, instead of sleeping in the front seat of their pick-up truck thanks to a concerned neighbor, a generous community and SOS! Richmond.  See their story here: https://youtu.be/ImYpb6t53zM
​